We specialize in helping students conquer stage fright and getting them on stage where they belong.

Standup 101 is our four-week class that will guide you every step of the way toward your first five-minute standup comedy set.

This class meets every Wednesday at 6pm for four weeks beginning on March 18th.

Each week in class we expand upon all aspects of standup comedy material generation, writing and performance.

You’ll perform each week in class (with on-stage exercises) and out of class (at our theater’s open mics) and receive full video your performances as well as feedback from our instructors.

At the end of the course you’ll perform alongside your classmates at a graduation show in our theater for your family and friends. And you’ll receive a performance video from this show as well.

If you’re serious about becoming a standup comedian and are looking for a safe, supportive and fun place to start this is the course for you.

Dan Bialek has been writing and performing comedy professionally for over 15 years. He is a graduate of USC’s creative writing program, a former doorman at The World Famous Comedy Store in Hollywood and has studied comedy performing and writing at The Upright Citizens Brigade, The Groundlings and IO West in Los Angeles. He has created comedy content for NBC, CBS, Funny Or Die, 2K Games, Smosh, National Lampoon and countless brands and media outlets. Dan’s standup performances have appeared on series such as Netflix’s “Man-Up Standup.” In his free time Dan enjoys surfing, spending time with his family and playing video games with his son. 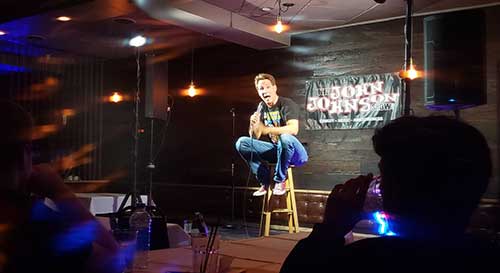